About 20,000 implants are inserted annually in the United States.  About 75% of these implants are manufactured by AMS.

How Does The Penile Implant Work?

The patient compresses the pump in the scrotum and water is transferred to the cylinders. This confers rigidity to the penis. Compression of the release valve, which is located just above the pump, allows water to drain from the cylinders.  This results in a flaccid penis. The cylinders of the penile implant consist of three layers.  The inner and outer layers are made of Silicone. The middle layer, orfabric layer, is made from a Dacron and Lycra weave.

The middle Dacron layer is designed to prevent uneven expansion of the cylinders.  Before this layer was introduced, cylinder aneurysm or bubble formation was a problem. The Dacron weave effectively eliminated this problem of uneven cylinder expansion.

Despite these improvements in design, cylinder leakage and cylinder malfunction remained a problem.   To address this issue, AMS introduced a new design modification. Starting in 2001, the AMS implant was coated with a polymer called Paralyne.  This substance reduced the friction between the Silicone layers and the Dacron weave. Paralyne has successfully reduced the rate of cylinder leakage and cylinder malfunction.

The reservoir is composed of silicone and is coated on the inside surface with Paralyne.  It is a seamless container and leakage is a rare event. The reservoir comes in a spherical shape for placement next to the urinary bladder.  The reservoir also comes in a flat shape. This is called the “Conceal Reservoir” and it is designed for placement behind the rectus muscle in the wall of the abdomen.

The compression pump has two functions.  The first function is to return the penis to the flaccid state.  The release valve on top of the pump allows water to drain from the cylinders and this results in a flaccid penis.  This button needs to be compressed for only two seconds. Consequently, this button is termed the “Momentary Squeeze”.

Finally, the pump contains a lockout valve.  This valve prevents auto-inflation of the cylinders. Auto-inflation results in an erection due to the spontaneous flow of water from the reservoir to the cylinders. This can produce an embarrassing situation.

The tubing that connects the components has been reinforced. It is designed to be kink resistant.  If the tubing becomes kinked, it will prevent the implant from either inflating or deflating. Also, the new reinforced tubing rarely leaks. 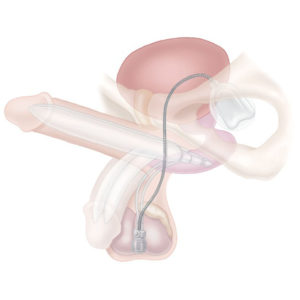 CX stands for controlled expansion.  Upon inflation, the cylinders expands in girth.  In other words, the cylinders becomes thicker during the erection.  This is a result of the uni – directional Dacron weave in the middle layer of the cylinder.

LGX stands for length and girth expansion. Upon inflation, the cylinders expand in girth and in length.  This is the result of the bi – directional Dacron weave in the middle layer of the cylinders.

CXR stands for controlled expansion restricted.  This cylinder is narrow and is designed for the short or narrow penis.  It is also ideal for patients with scarring of the penis due to Peyronie’s disease or scarring due to prior implant infection.

The implants come in different lengths including 12 cm, 15 cm, 18 cm and 21 cm.  The penis is carefully sized during surgery and the largest implant that the penis can accommodate is selected. In order to decrease the rate of penile implant infection, the AMS 700 is coated with a material called Inhibizone.  Inhibizone consists of two antibiotics – Rifampin and Minocycline. These two antibiotics are attached to the surface of the implant and they are released very slowly following surgery.  It is important to know ahead of surgery if the patient has an allergy to either Rifampin, Minocycline or to Tetracycline. Inhibizone has cut the rate of penile implant infection in half.